We’d like to share the vision of the development of a memorial for Te Whiti o Rongomai, Tohu Kakahi and their followers.  We know of nowhere within the Anglican church where they are commemorated in a sacred object, and can think of no better place for this than the cathedral church for Taranaki.  The sacred object will be an altar cloth for daily use in the main sanctuary.  The design will include symbols for the community of Parihaka and the Taranaki Anglican faith communities.  Once the design has been composed, the cloth will be mounted on a frame in the Cathedral foyer.  We will invite every visitor to contribute a stitch.  In this way the altar frontal will bear the fruits of many hundreds of hands and prayers for peace, expressed in thousands of stitches.  The end result will be an embroidered artwork which represents the resurrected relationship of the Anglican communities of Taranaki with the community of Parihaka.

What does our faith say about peace?

In the face of land confiscation the people of Parihaka, led by Te Whiti o Rongomai and Tohu Kakahi also chose peaceful resistance and civil disobedience.  When the community’s livelihood, wellbeing and survival was threatened, they responded by ploughing, removing survey pegs, fencing, marching and even setting up new communities on the confiscated land.  As the 2500 settler troops entered the community on November the fifth, 1881, the people of Parihaka welcomed them with song, dance and food?.  Despite this however, arrest, rape, relocation, ransack and death in exile followed.

This radical adoption of peaceful resistance contrasted to that of other Maori whose land and livelihood were also under attack during the late 1800s.  It was directly inspired by the gospel which they had received through the teachings of Rangihatuake, a former Nga Puhi slave who preached at Rahotu in the early 1840s and the Lutheran missionary Riemenschneider.

Hindsight and the recognition that history tells two sides to a story now indicate the many great wrongs perpetrated during this time.  Past grievances have begun to be addressed in our generation through mechanisms such as the Waitangi Tribunal.  At Taranaki Cathedral we wish to celebrate this costly stand for peace by the people of Parihaka.  By so doing we contribute to the conversations of reconciliation.

Stitches underway
The first stitch was sewn on the first anniversary of the consecration of Taranaki Cathedral - by our Kaumatua.

We now invite you to offer a prayer for peace, and to embody that
prayer by the sewing of stitches. Our pilgrimage for peace
requires that we search for the image of our own faith
community, or one that is precious to us, and to place our stitch
in it.

We invite you prayerfully to sew into this sacred object, which
will, one day, rest on the Nave Altar in Taranaki Cathedral, New
Plymouth.

As you do so, may you be reminded of God's
great love, and of our common identity as
God's children. 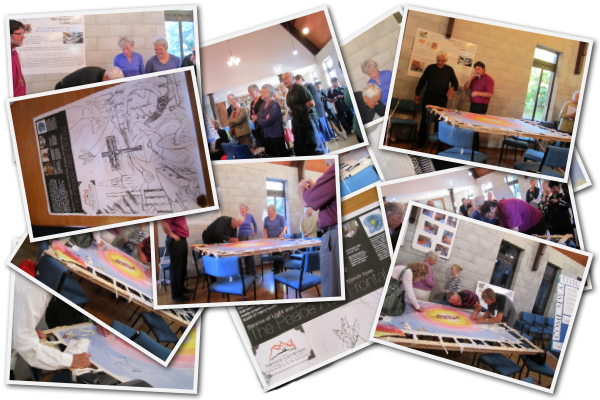