Community of the Cross of Nails

Taranaki Cathedral is part of the worldwide peace movement, the Community of the Cross of Nails 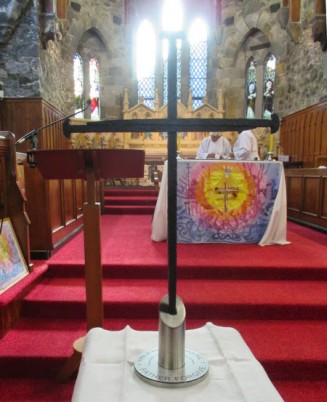 The cathedral's membership was honoured in 2015 over several days when The Very Reverend John Whitcombe, the Dean of Coventry Cathedral visited.

Coventry was ravaged by bombs in World War II but church leaders vowed in 1940 to work towards peace not vengeance, giving rise to the Community of the Cross of Nails.

Dean John’s visit included a presentation of a cross (on right) that represented the cross made from nails in 1940.  He also called into Parihaka community in coatal Taranaki, a significant site in the context of the peace movement.

Joining the CCN was another step in the cathedral’s own journey of peace and reconciliation, said Dean Jamie Allen in 2015. Since becoming a cathedral, its relationship with tangata whenua has deepened.  This has included an apology by the Archbishop of York John Sentamu to Māori, the embroidery of a peace altar frontal cloth, the building of a garden of remembrance featuring carvings of the white Raukura feathers (from Parihaka) and the moving of the hatchments.

Taranaki Cathedral hopes to help establish a New Zealand hub for the Cross of Nails that can be connected into the worldwide network.

There are three strands to being a CCN member: Actively working to heal the wounds of history, learning to live with difference and to celebrate diversity, and building a culture of peace.

When the cathedral joined the CCN Dean Jamie commented: “We have been saying for some time that we are a centre for prayer and reconciliation without defining what that means. But when this big cross of nails is here, it means we’re hammering our colours to the mast and saying this is something that God is giving us to do because of our history and our place.”

The 170 CCN partners are spread across 35 countries and range from peace-keeping organisations and refuge centres to schools and churches.

CCN publishes a monthly newsletter - you may subscribe to receive it by email here.