In nearly every churchyard throughout the shires of England sits an old and venerable yew tree. More like Tolkien Ents than everyday conifers, these ancient trees have seen countless celebrations of births and marriage and witnessed many a sad and sombre funeral procession. Being linked with everlasting life the yew tree is heartening for the living in a place of mourning. 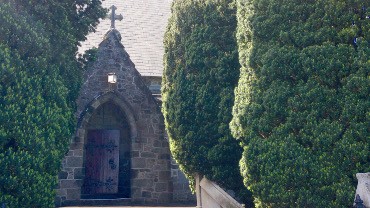 Yew trees are typically dense low growing trees with an almost horizontal appearance. But way back in the 1780's someone found two very upright Yew trees growing in County Fermanagh in Ireland and nowadays this popular garden form is known as the Irish yew Taxus baccata Fastigiata'. This is the more familiar form in Taranaki seen at the cathedral, Te Henui Cemetery and The Gables up by the zoo. But in truth we don’t see many yew trees in Taranaki and the reason for that is they love chalk and limestone regions. While they tolerate our acid soils they often die from root rots associated with our mild and wet climate. They prefer a climate with a real winter and more variation in the seasons.

Yews have other uses of course, being popular in colder regions for making garden hedges. This is because they are dense evergreens which given the right soil will stand the test of time. Also they have a rare quality in a conifer – they tolerate pruning even to the extent of cutting beneath the foliage layer. Most conifers will not regrow if you cut below the foliage but yew and also our native totara are exceptions.

Of course you can’t grow yew trees anywhere near stock, as the foliage is poisonous to sheep and horses, except deer who can eat it with impunity. The poisonous aspect is sometimes put forward as to why there are yew trees in English churchyards. The more likely scenario is the plant was sacred to the pre Christian pagans because it is evergreen. Very few British native plants are evergreen, and every one had special significance for the pagans, notably holly, ivy and mistletoe. Most evergreen plants you see in English gardens came from America and China.

Imagine if you’re living near Stonehenge four thousand years ago and it’s midwinter, then any tree or plant still alive and covered in leaves is a reminder that all’s well with the world. All through pre-Christian times yew trees were planted on sacred sites. Naturally enough the early Christian missionaries chose the same sites for churches. Why waste a good spot, usually on the highest ground in the village, so a yew tree was there at the creation of the church.

Another theory why the trees are in churchyards is because the timber was used for making bows. I imagined the long whippy stems were the pieces used for bows and sure enough as kids we found they did make excellent bows. However, it turns out proper archer’s bows were made from the trunk of the tree and the real advantage of yew over other woods was the difference between heart and sap wood. The softer more flexible sapwood, which is yellow, was ideal for the outer face of the bow as it has to stretch further, while the older stronger heartwood, which is red, forms the backbone of the bow on the inside.

The ancient Greek word for an archer’s bow was toxon and in turn the tree most commonly used for making bows was Latinised to Taxus. Because the taxus or yew tree was thought to be poisonous old Roman scholars used the word to describe poisons, giving us the word toxic. It turns out the plant isn’t as deadly as once supposed. One of the most effective cures for breast cancer is a drug called Tamoxifen extracted from taxus species. The drug was originally extracted from the stems and foliage of the plant but it was difficult to source enough material. Then scientists discovered the active ingredient is produced by a fungus within the plant and so were able to duplicate this in the laboratory and create sufficient material for worldwide use. So the old yew tree, being evergreen, not only has a life all year but can extend the lives of people too.

*This article, previously published, is abridged and kindly reprinted with the permission of author and local horticulturalist Glyn Church.