The Women Who Minister

Mary and Ailsa. Two different women. One more famous than the other – but with parallels between the pair.

The ordination to priesthood of Ailsa Claridge took place on Sunday August 14 in a 7pm service at the Interim Cathedral in the Peace Hall, New Plymouth.

It coincided with the patronal festival, the Feast day of Mary, mother of Jesus.

In his sermon, Dean Peter Beck noted a connection between the ordination of a woman on the day Mary’s significance to the church was celebrated.

How did we picture Mary, he asked? Often she was portrayed as humble and obedient, quietly regal or as the Virgin, eternally in a state of perfection despite biblical evidence that she went on to have more children after Jesus.

Where in sacred art were the other pictures found in Bible passages? The spirited one for example, or the mother who searches endlessly for a lost 12-year-old Jesus and really “lays into him” when she finds him.

Luke’s picture of her in the Bible is of a poetic theologian of the new age: She sees the events of her world, makes connections between them, draws on her religious roots and pours this out in a beautiful hymn of praise. It is likely that she taught Jesus much and helped mould the man he became.

Gill Lovell, a priest in the diocese of Oxford in England, has pondered on the difference between the mythology and the reality.

She has noted that Mary was not likely to be a “wee quiet wimp but an intelligent, articulate and bold woman, unafraid to sing her song for all to hear.”

In his sermon Peter said: “To my mind we are coming to ordain such a woman tonight.

“You are where you find yourself this evening Ailsa because God has called you. You have heard that call and somehow or other you haven’t been able to resist it.”

The special service was marked by a number of other touches.

The Very Reverend Marg Schrader read a passage from the New Testament. A Presbyterian minister and former moderator, she has been a part of Ailsa’s life since she was a teenager, attending significant events in her life such as weddings.

Jamie Allen, the former dean of the cathedral, changed Ailsa’s stole as acknowledgment of the part he had played in her faith journey.

The service was presided over by Archbishop Philip Richardson and Bishop Helen-Ann Hartley, and more than 30 clergy from the Waikato/Taranaki diocese attended.

Choristers from a number of different choirs occupied the ‘stage’. (While the cathedral is ‘glamping’ in the Peace Hall, the stage doubles as choir stalls.)

St Mary’s parishioners took part in different ways: Contributed to a supper, enjoyed the joyous nature of the occasion or, in the case of young Nathan Morris (pictured with Ailsa), helped serve communion. 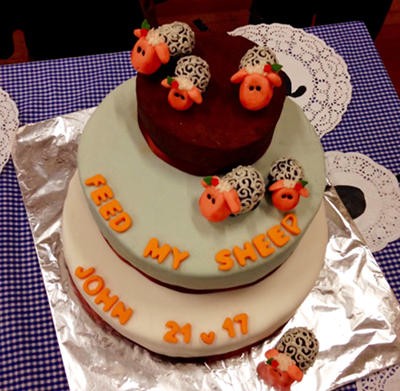 The triple tiered ordination cake, with its theme of sheep and pastoral care, was baked by Cath McVey and iced by Nikki Morris. Earlier in the day, children at Faith Crew had cut and glued doilies to create dozens of paper sheep.