Geoffrey James Ginever was born in Chilwell in Notts in 1939 and lived there until he was 14, when his father thought New Zealand was a better place to live and educate his sons.

Geoff attended the University of New Zealand obtaining both his Bachelors and Masters degrees. This was followed by Teachers’ Training College and teaching at Auckland Grammar.  Ever an intellectual he studied for the priesthood at St John’s  Theological College having obtained a Bachelor of Divinity degree from Otago University.

It was in 1968 that he was ordained Deacon here in St Mary’s and served with boththe Ven. Ken Liggett and the Ven.Peter Butt.  And here that he found his helpmeet -  he and Kerry were married at St Mary’s immediately following the 125th  celebrations of the parish.

Then followed a ministry in the Claudelands parish with the Ven. Rex Clarke.

In 1971 Geoff became vicar of Putaruru in the Waikato, and it was during this time he had the oversight of the parish as it entered into a Co-operative venture.  However a breakdown in health saw him take up a less stressful role as Assistant Priest at St Mary’s.  So Geoff and Archdeacon Michael Bent, Robert Bruere and Ray Shaw made up the parish clerical team during the 1980’s.

St Aidan’s in Frankleigh Park was on the growing edge of the parish and Geoff and Kerry worked long and hard to build up the little congregation there, including starting the popular Thursday Club.

After his two year contract with the parish came to an end wishing to stay in New Plymouth Geoff joined the Lands and Survey Department.  There he fulfilled an excellent ministry with his facility for writing and his strong organisational skills.

At tne same time Geoff  was able to carry out a useful priestly ministry in various parishes in the Archdeaconary  but above all in his role of preacher,  especially at Evensong.

But many will still remember him in taking the Sunday 8am and Wednesday 10am services here at St Mary’s. 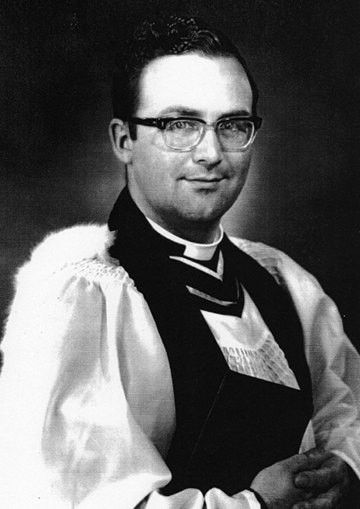 His book of Sermons WORDS FOR ST MARY’S – A PREACHER’S PILGRIMAGE bears witness to his ability as a scholar and his wide reading of theology.   He paid great attention to their preparation and always typed out at least three copies of each address.  These are still extant and Kerry hopes they will be of use in parishes where lay leaders are called upon to deliver sermons.

Always interested in the Healing Ministry of the Church Geoff was one of the founding members of the Mana Healing Centre at Oakura, where he was chaplain for a time.

Geoff also wrote articles for such papers as WHOLENESS and for a time was editor.  He also made contributions from time to time in such newspapers as Midweek and had a regular feature in the Sunday Express under the pen name of Bramcote, which had close links to the Ginever family in England.  These he also published.

He will be remembered too for his editing of the POEM IN STONE the history of St Mary’s the preface of which bears witness to his long service to the Church in this place.

Never in the best of health Geoff suffered his first heart attack in2012 and  moved into Tainui Village in that same year.

He was always most thankful for the help that he had there from colleagues Sue Pickering, Heather Lofthouse and John Carter, and from all members of the staff.

Geoff. was ever a quiet person, thoughtful,  insightful of all that was taking place around him and in the world.  His autobiographical book of sermons bears witness to this.

There is no doubt about it -  Geoff’s talent lay in his preaching of the word of God as he had discovered it for himself by diligent study of the Holy Scriptures.

Reading now that book which Geoff left for us WORDS FOR ST MARY’S – A Preacher’s Pilgrimage we can see the talents of his ministry in seriously tackling the Word of God and conveying that immediacy to others. Those of you who heard him preach will remember his quiet delivery and the earnestness of his intent.

As Shirley Murray has written,

…In the ministry of preaching

May the Word spring into life;

In time of doubt and challenge

May its truth affirm belief;

In the day of pain and darkness

Heal the hurt of guilt and grief

“May this cathedral continue to be a place of worship, prayer and GOOD PREACHING”

Eve looked at Adam and said “Adam, do you love me?” Adam’s reply was “Who else?”

And the young lad who found a large very old Bible in the attic and within its pages of the book Genesis, a crushed leaf.  ‘O look, he said, Adam’s left his clothes here’.

John Taylor that great Christian soul once said, “I am a retailer of the words of others” to which Geoff. added “it was good enough for him and it will be good enough for me.”

May he rest in peace and rise in glory.

Copies of "Words for St Mary's" are available from the Cathedral for $25 (plus $8.50 p&p for mail orders). An e-book version will be published within the next few months.