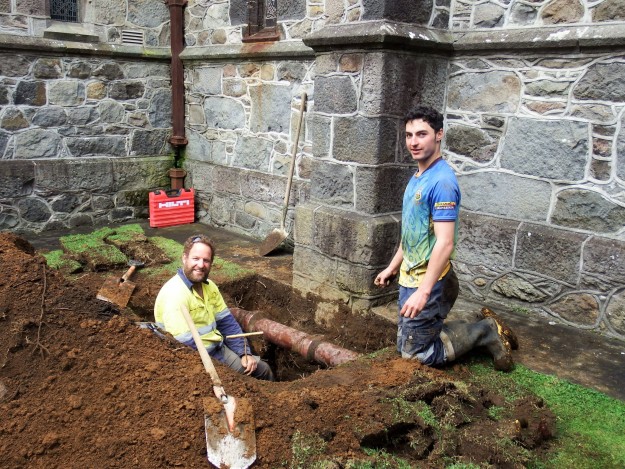 Matt Cathcart, left, and Toa MacDonald, of Clelands Construction, excavate the foundations of Taranaki Cathedral’s oldest wall, which was built in 1846.

The Cathedral Project is digging into the church’s past to ensure there is a strong base on which to build the cathedral’s future.

Excavation investigation work of the 172-year-old building’s foundations is being undertaken as part of the project to earthquake strengthen and refurbish the historic cathedral – New Zealand’s oldest stone church.

“The project’s engineers, Holmes Consulting, have identified seven or eight areas on the outside and inside of the church where they need to know the condition of the foundations, such as the depth, how wide they are and the soil type,” The Cathedral Project remediation and design manager Jenny Goddard said.

“The architectural drawings of the church when it was built don’t tell us a lot, so this is taking the guesswork out. We’ll send a report of our findings to the engineers which will help them build a clearer picture of the structure of the church and form part of the analysis for any additional foundation work that may be required.”

The digging work, carried out by Clelands Construction, has produced some interesting findings.

“The church has been added to over the years, so there are various types of foundations due to the different builders used, changes in technology, and varying soil types,” Mrs Goddard said. “What’s beneath the oldest wall, built in 1846, is quite different to what’s beneath the newer walls built in 1900 and 1915.

“The foundations of the oldest wall are purely large stones – Taranaki andesite. In another section there is a mix of stone and old-style concrete, while in the newer areas there is more modern concrete,” she said.

“We were surprised to find just how big some of these andesite stones are. Because they are of various shapes and sizes they often go deeper than we thought. Below the oldest wall, the stone goes 1800mm below ground level, while in newer areas of the building the foundation is 700mm deep.”

Mrs Goddard said it was also necessary to remove flooring and excavate inside the church to determine the extent of the foundations.

“A key part of the construction of the church is the buttresses – the stone structures that support the weight of the wall. We need to know the condition of the foundations on the outside and inside at the buttresses to give us a complete picture.”

The excavations have been carried out carefully with a focus on protecting what’s below the surface. Only hand tools – shovels and spades – have been used to dig away the soil outside, while inside, sections of floor boards that have been removed have been numbered so they can be seamlessly reinstalled.

“We have had archaeologist Ivan Bruce on hand if needed and have involved Ngāti Te Whiti, the kaitiaki of our site, in the process,” Mrs Goddard said.

Taranaki Cathedral Church of St Mary has been closed since January 2016. The earthquake strengthening and refurbishment of the cathedral is the first part of a three-stage, five-year $15 million project to create a cathedral precinct on the site, incorporating a welcoming atrium and the adjacent vicarage.

The remediation of the cathedral was recently granted resource consent by the New Plymouth District Council, enabling more detailed specialist and consultant work to begin on the engineering, historical and conservation aspects of the project. 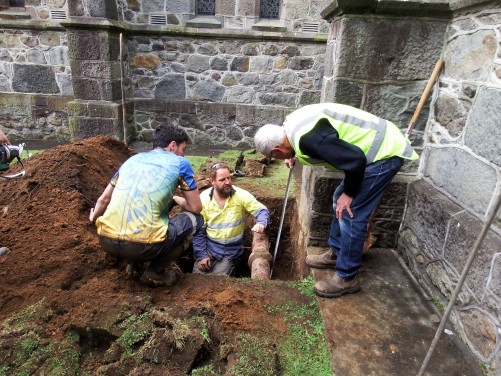 The depth of the foundations is measured. The foundation stone in this section of the oldest wall of the cathedral reaches 1800mm below ground level.