Planting hope, one child at a time

As a teenager kicked out of home, Ugandan woman Lillian Nakabiri wanted to poison herself.

Her family didn’t want her, life was characterised by loneliness and poverty and killing herself seemed the only answer.

In despair, she started reading letters she’d received over the years as a sponsored child.

“I wanted to die happy, reading them. They gave me joy,” she told hundreds of school students in a moving talk about her early years.

The written words from her Australian sponsor planted a seed of hope. She didn’t take the poison – instead she walked with her few belongings to a nearby church.

It was a place she’d first visited as a child of nine, and the place where she had earlier became a sponsored child through Compassion International, which has links in NZ with Tearfund.

Describing herself as the prodigal daughter returning home, she ended up in a leadership development programme and eventually gained a Bachelor of Mass Communications and a Masters in International Relations and Diplomatic Studies.

Now she regularly travels and talks in other countries.

The scheme changed lives – she was proof of that.

“The world is a different place and people who are privileged don’t necessarily know that they are privileged.
“Somebody helped me from a privileged country and I’m helping people to understand that whatever they are doing is not in vain – it’s all worthwhile.”

Once she was a problem for her country, now she is part of the solution.

“I challenge people wherever I go by asking what are they doing to be part of the solution.”

Talking afterwards to Sacred Heart senior students, she was impressed with their maturity and told them: “Just be focused because what you have achieved here you need to spread to others…so that others see you as an inspiration.”

This is Lillian’s fourth visit to NZ but for the first time she brought her husband, Davis, who had never travelled out of Uganda. The couple was recently married so the visit was something of a honeymoon.

On the trip from Auckland to Taranaki he hung his head out of the window and marveled at the countryside.

Lillian described NZ as “so clean, so fresh and so nice.”

“I can not imagine living in a place where I can turn on the tap and get clean drinking water.”

The couple is touring New Zealand with singer JuliaGrace to promote the work of Tearfund, and will travel through the North and South Islands before flying out of Christchurch in mid-September.

During Lillian’s weekend in New Plymouth she spoke at Central Baptist Church as well as at the Salvation Army and in Inglewood. 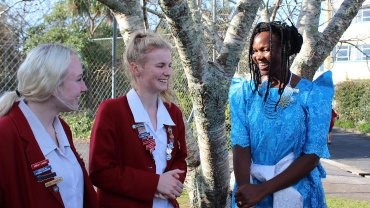