Whether up to her elbows in soap suds in the cathedral kitchen, grubbing in the gardens or delivering this magazine, Patricia Gall is happily continuing the voluntary church work that has been a big part of her life.

Patricia was born in Stratford, but her parents were farmers at nearby Cardiff. She helped on the farm from an early age, 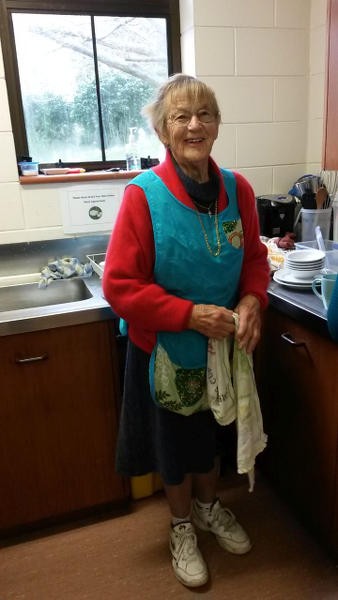 and started milking when she was 13. She had to bike five miles to the high school, “and when I left, I became a fulltime land girl.”

At Cardiff she attended Sunday School (where she eventually took over the role of leader), polished the brass and set out the flowers for the church services.

Patricia and her husband Bill farmed at Kaimata, where she prepared the little church for the monthly service. She also worked for the church in Inglewood, her roles including membership of the vestry.

One Inglewood vicar, Reg Eades, was “absolutely amazing;” it was a demanding parish, and his challenges included coping with suicides and murders.

Patricia and Bill had four sons and a daughter. Bill died 27 years ago, and four years later Patricia moved to New Plymouth, where she began to attend St Mary's. “It took me a little while to feel at home there; I didn’t find it a friendly atmosphere to start with. But there was a group of ex-Inglewood people who sat at the back of the church, and I joined them.” Nowadays she feels completely at home, but those early experiences have prompted her to make a point of smiling at newcomers.

Eventually she began helping with the church gardens, a task she still continues today. “I have always loved gardening, and now I grow plants for the hospice shop and manage to deliver a lot once a week.”

She also delivers the cathedral magazine, and washes up for the Community Cafe on Tuesday mornings.