US pair attracted by gospel in action

A sense of community was the drawcard to Taranaki Cathedral when Nancy and Doug Getson looked around for a place to worship.

New Plymouth has been their home for just over two years; sadly a change in Doug’s work means they’re leaving in the next few months.

Churchgoing is something they have always done. She was brought up a Baptist, he a Catholic but when they got together neither of those denominations suited.

Instead they ended up (initially) in an Anglican church (called an Episcopal church in the US).

Most recently, while living in Jefferson City, Missouri, they frequented a Baptist church with their two children Ben and Olivia, as that suited them and their growing teenagers.

When Doug was posted to New Plymouth in June 2014 to work for the ABB factory as Local Business Unit Manager he went church ‘shopping.’

“Doug made a few visits to different churches and he said, ‘this is what I think is a good fit for us’ and it was,” explains Nancy who arrived six months later with daughter Olivia.

Reaching into the community is important for them. Doug has previously been involved in Habitat for Humanity, taking part in mission trips to South America and Nepal.

“Jamie [Allen] was a big influence in the way he was drawing the focus into what are we doing for those that are truly in need. That really, really appealed to us,” says Nancy. 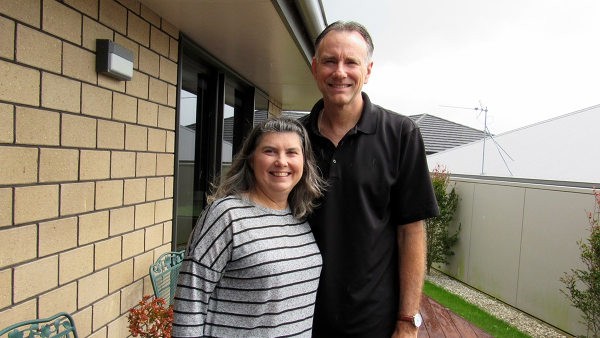 Photo: Doug and Nancy Getson at their home.

In 2014 when they arrived, services were in St Mary’s and its aesthetics struck them.

“The beauty of the cathedral and the fact we were worshipping in a building that had been there since the 1840s – we felt that sense of history.”

Moving across Vivian St to the Peace Hall, when the cathedral was temporarily closed, didn’t detract from the sense of community.

Nancy describes an ongoing sense of “authentic worship” and says it’s because the people are still the same.

Peter Beck is now the Cathedral Dean, and the Getsons see him continuing the same outreach initiatives while bringing his own style.

Says Doug: “I like that diversity, it’s still happening with Peter. I think that’s the great thing about the church. You want to keep your fundamentals, but there’s no reason why the services can’t be different and unique and more to the style of the person that’s leading at the time.”

* As well as living in New Zealand the Getsons lived in Ittenbach, Germany for four years. They met in Nancy’s hometown Alamo, Tennessee when Doug, an electrical engineer (who grew up in Miami), started working in a local factory. Nancy trained as a primary school teacher.