History of the Cathedral

It began as a vision 168 years ago. New Plymouth’s early Anglican community hoped to install their own Bishop within a Diocese of Taranaki. But war, and the passing of time got in the way. Now the vision has come full circle – with a twist. The structure operates like a catamaran boat: Two Bishops, two diocese, and two regions working together.

In October 1842 Bishop Selwyn established an Anglican presence in Taranaki, obtaining a Crown grant for the land on which the Taranaki Cathedral St Mary’s church now stands.

His aim was to set up a Diocese of Taranaki with its own bishop. Archdeacon Govett and parishioners progressed the dream, hoping to see a diocese underway in 1870. But the NZ land wars and the unsettled development of Taranaki prevented this.

In 1913 Archdeacon Cole established a fund to endow a bishop. In 1922 other trust funds begun by Govett were added.

Then a setback occurred. Taranaki’s central and northern parishes were added to the Diocese of Waikato after it was separated from the Auckland Diocese in 1926. Income from the Taranaki Bishopric fund was directed to Waikato. Taranaki’s southern parishes stayed with the Wellington Diocese.

It was another five decades before Archbishop Brian Davis and Bishop Roger Herft explored the idea of a bishop in a unified Taranaki. By now St Mary’s was known as a Pro Cathedral. However, it wasn’t until Archbishop Davis, Bishop Brian Carrell and Bishop David Moxon created a Taranaki Commission in 1996, that unification became possible.

Approval from parishes and the Waikato and Wellington Dioceses came on 31 May 1997; in 1998 General Synod approved the boundary changes and the creation of a Bishop in Taranaki within the Waikato Diocese.

The Reverend Canon Philip Richardson was nominated the first Bishop in Taranaki at an Electoral College on 12-14 February 1999. At the time he was Warden of Selwyn College at Otago University in Dunedin. He was licensed to the Bishop of Waikato and was to function as Vicar General of the Diocese. Approval came from the Bishops and General Synod a month later. 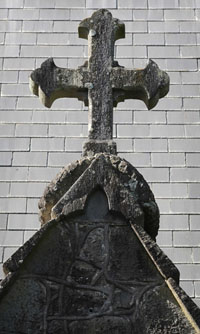 Following this, the Taranaki Cross was made from old, locally milled rimu, originally part of a beam from St Cuthbert’s church in Manaia, built in 1894. To prepare the way for the new Taranaki Bishop, the cross was taken to every church - large or small - around the mountain.

From Maxwell and Waverley in the south, to Uruti and Urenui in the north, the ‘Cross of Love, Prayer and Unity’, as it was known, was seen, touched and blessed by people who gathered to pray together and share the Eucharist.

In this cross hundreds saw a reminder of their own faith and a symbol of hope for the church in this region. From its final blessing in the Cathedral of St Mary on 4th July 1999, the Taranaki Cross was taken to the Bishop-Elect’s retreat, linking him with those who had prayed for him and his family since his nomination. On 10th July 1999, it took its rightful place in St Mary’s church and has been part of significant services ever since. At Bishop Philip’s request a simple Episcopal cross was also made from the same timber.

As a result of this partnership, and the benefits it brought there was a new proposal. The Waikato Diocese brought a motion to the 2008 General Synod of the Anglican Church in Aotearoa, New Zealand and Polynesia seeking the creation of two Bishoprics within the same diocese: a Bishop of Waikato and a Bishop of Taranaki. The wording is as follows:

“Be it known unto you by these Presents that the Anglican Church in Aotearoa, New Zealand and Polynesia, did, on the fifteenth day of May in the year of our Lord two thousand and eight during the Fifty Eighth Session of the General Synod Te Hinota Whanui held in the Diocese of Wellington, following the passing of the Shared Diocesan Episcopacy Confirmation Bill 2008, in the presence of the bishops, clergy and faithful laity there assembled, recognise the two Bishoprics within the Diocese of Waikato. One shall be known as the Bishopric of Waikato, and shall comprise the Archdeaconries of Piako, Waikato and Waitomo, and shall be based at the Cathedral Church of St Peter in Hamilton.

The other shall be known as the Bishopric of Taranaki and shall comprise the Archdeaconries of Parininihi and Waitotara and be based at the Cathedral Church of St Mary in New Plymouth. It is noted that the new legislation recognises that each Bishop shall have Episcopal jurisdiction within their Bishopric and be Vicar-General to the other Bishop.”

Before, during and after this period, diocesan structures evolved to reflect a catamaran – a structure of two hulls with one bridge and sail.

Each bishop licenses clergy and lay ministers within their own jurisdiction, each bishop is Vicar-General to the other, both bishops chair the Standing Committee of Synod, the Board of Nomination, the Examining Chaplains, the Schools Board and the Episcopal Ministry Group.

The synergies and opportunities of this two-in-one arrangement have resulted in creativity and energy for local mission, while also benefiting from a wider network of resources and people.

The role of the Bishopric of Taranaki realises - to a significant extent - the original 1842 vision of Bishop Selwyn. But the job is a little different: It encompasses Anglicans across a third of the North Island, not just those in Taranaki.

On 6 March 2010 the Church was consecrated as the Taranaki Cathedral Church of St Mary, reflecting the role it has in relation to the ministry of the Bishop of Taranaki and that it is called to be a sacred place for all the people of Taranaki.

Legislation will be brought by the Diocese to the General Synod in May 2010 to change the name of the Diocese to “The Diocese of Waikato and Taranaki” to reflect the above developments.

^ top
Filed under Stones and Mortar 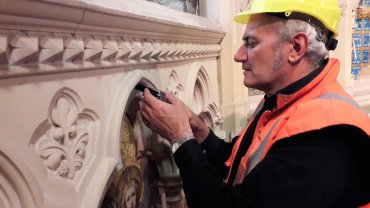 Cathedral's saints on the move 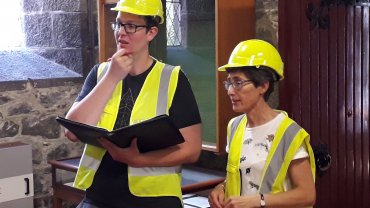 Stamping out the threat of fire

Reply Alison O'Byrne (Author) | August 10th, 2017 at 1:26pm
As my ancestors arrived in New Plymouth on the William Bryan as part of the first settlers to land here I am interested in the History of their connection to this amazing church. My grandfather was J H Revell a Blacksmith on Currie Street his wife, my Grandmother was Agnes Revell (nee Williams) I was told during my childhood that she has a beautiful voice and sung in the choir there. I would love some information if there is any history about my family. I'm an only child and my father, their son was in his 50's when I was born so a generation missed really. Also I have connections to the Sarten family as My Gt Grandmother was Mary Revell (nee Sarten) and maybe it was her that was in the choir.
I aren't an Anglican but did grow up as one in my childhood. Sometime ago I contributed to the Sarten grave in your ground when it was updated by the family at the time of their reunion. I would like to help with a small donation in the future for your renovations and need to know my family connection as it feels important to me later in my life now.
Thank you
Alison O'Byrne

Reply Richard Grevers (Author) | September 7th, 2017 at 2:00pm
Thank you Alison. We don't seem to have your email address, but if you contact info@taranakicathedral.org.nz I will forward your enquiry to the appropriate people.
Next Post
Previous Post