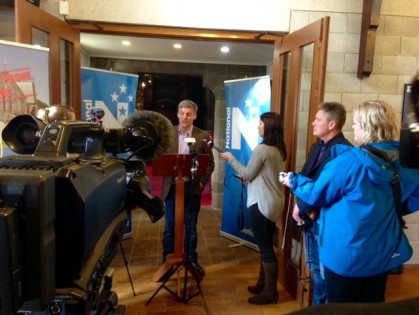 Taranaki Cathedral has been identified as a priority historic building under the extension of a fund that promises an additional $30 million for earthquake prone buildings.

On Saturday Prime Minister Bill English announced the increase to the Regional Culture and Heritage Fund (RCHF), spread over four years, as well as the inclusion for the first time of historic churches and places of worship “that are central parts of the community's character".

Church leaders hailed the announcement as a lifeline for the region’s cathedral, which is the oldest stone church in the country but is currently closed for a $15 million earthquake-strengthening project.

The Prime Minister’s announcement, delivered at Taranaki Cathedral during his weekend visit to New Plymouth, was backed by Arts, Culture and Heritage spokesperson Maggie Barry.

“St Mary’s Cathedral in New Plymouth and the Church of the Good Shepherd at Lake Tekapo are two of the buildings which could benefit from the change and will be identified as priorities under National,” she said.

“Whether you’re a religious person or not, historic churches and other places of worship are central parts of a community’s character. They are landmarks, venues and meeting places for many people and among our grandest and most architecturally significant buildings.

The Prime MInister acknowledged the enormity of the task facing the Taranaki community, as well as the persistance and encouragement of local MP Jonathan Young.  He said the funding would be available on the basis that the Government would contribute one-third of the costs of a project, and where there is broad support and an active community that is able to contribute.

Recognising the vision of the remediated Taranaki Cathedral he said: "It's not just restoring what is here, but altering and changing its use somewhat in a way that is going to be beneficial to the whole community."

Cathedral Dean Peter Beck says it’s the best news the cathedral community could have hoped for. “I believe this is an historic moment for Taranaki Cathedral.

“What this means is that we are not only well on the way to saving a vital part of our nation’s architectural heritage, we are enabling a vision of how the cathedral can be a place of worship and welcome for people of all faiths and none, where our story from 1846 is acknowledged and our commitment to peace and reconciliation between all people is our purpose.

“Without significant support of the Crown, the remediation and development of Taranaki Cathedral would not be possible.”

“We thank local MP Jonathan Young, the Prime Minister and all his team. Many people are working hard behind the scenes on this capital fundraising project – this commitment is a huge morale boost for them.”

The remediated cathedral and developed site will be a significant tourist attraction as well as a venue for a diverse range of events and services, he says. “A visit will become an essential part of every young person’s education. This encapsulates our history as a nation – the good, and the not so good.”

The Government support came the day before a significant hui at the cathedral. Iwi, churchgoers, members of Sir Paul Reeves family and New Plymouth MP Jonathan Young gathered to set out and consult on the developing vision for cathedral.

The Reeves family gave its blessing for the honour of associating the Reeves name with the emerging kaupapa of the cathedral and with the atrium development in particular.

This recognised Ta Paora’s contribution and commitment to peace and reconciliation. He is descended from North Taranaki iwi Te Atiawa and is notable for many achievements, including being the first Māori Archbishop and the first Māori Governor General. 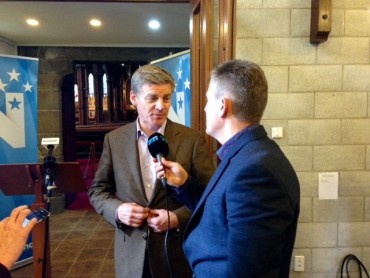 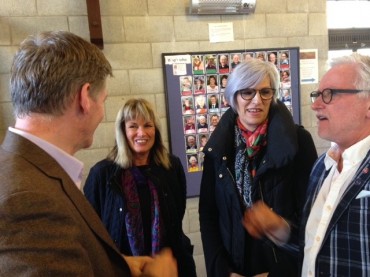