Rob, an associate priest at Taranaki Cathedral who is married to Annie Baigent-Ritchie, became a Christian in 1971 at Christchurch Cathedral.

He grew up in the city, and as a youngster attending St Barnabas’ church with his parents, remembers loving parables and the stories of the New Testament. “Not just the gospel stories about Jesus but about all the people around him.”

It was at the city’s cathedral, however, where he decided at age 19 to undertake theological training.

The teenage conviction wasn’t followed through straight away as Rob opted to train as a school teacher, specialising in science (including senior biology).

Then he travelled overseas to see family in England before returning to embark in 1980 on a LTh (a Licentiate in Theology) via distance learning in Christchurch.

In 1981 he headed to St John’s College in Auckland, a pivotal year for NZ. “It was a pretty interesting time,” he says, recalling the Springbok tour protests and his part in them as one of hundreds who invaded the pitch for the crucial Hamilton game. In dramatic fashion, Rob helped others carry a large wooden cross onto the field. 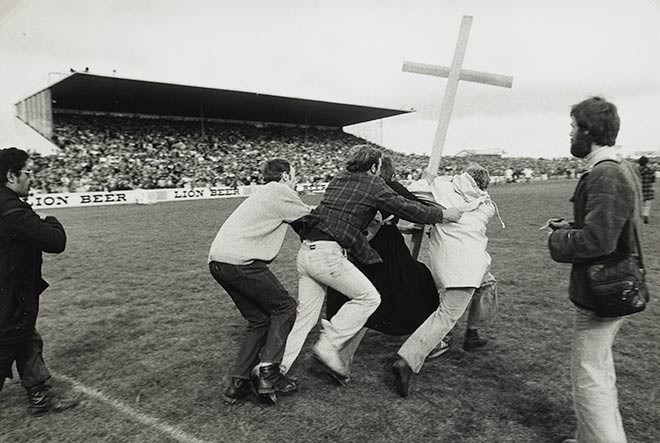 "Theological training was pretty exciting…there was lots of social justice action going on.

“At St John’s we had the opportunity to join a project in a state housing area and I was living with a number of others including Bishop Philip Richardson, who was another student at the time.

“That was quite transforming because we were living amongst people who were tenants of state houses and they were just great. They gave us so much, they took us in, and they were so welcoming.”

The Glendowie street they lived in was parallel to another, regarded at the time as the worst in the city, recalls Rob.

“I left there [after two years] feeling so grateful and grief stricken that I had to leave.”
Rob became part of a Māori family to whom he’s still known today as ‘Koro,’ a term of respect for an older man. As members of the Ratana church the whānau taught him much.

He returned to Christchurch, worked in several parishes but became disillusioned with where he thought the church should be heading.

For the next 10 years, employed as a social worker, Rob ministered in a different way, immersed in child protection work for Child Youth and Family. “I met some quite incredible people.”

Religious connections continued. “I was closely associated with a number of friends from different denominations. The Ratana Church was probably the biggest influence during that time.”

In recent years Rob moved to Turangi, living on a whānau property that hosted a small multi-denominational church group affiliated with a global indigenous Christian network.

“The thing about Māori Christianity is it makes sense of the gospel because it’s so immediate. I think the best thing I can say about why I didn’t go to church was when I arrived there one of the young guys, who was part of the house church, said to me, ‘Do you like church?’ and I said ‘Not very much.’

“He said, ‘a lot of my Pākeha brothers and sisters ask ‘Where do you worship’ and I feel like saying to them, ‘I do worship every breath, every minute, every day.’ We are walking a gospel reality all of the time.

“The view I had of the church before Turangi was way too small. I suddenly realized how big church really was,” says Rob.

Taranaki lured him because in it sat the settlement of Parihaka, which he first read about while at St Johns’ College when friends gave him and fellow students a copy of Dick Scott’s book ‘Ask that Mountain.’

So he made it to Parihaka in 2006, the year of the settlement’s first peace music festival. Trips back and forth followed before in 2013 he met Annie and her son, Harry. In January 2017 the couple was married (with Bishop Philip Richardson and Reverend Ailsa Claridge presiding) in Turangi.

Annie is the vocational deacon at the cathedral, as well as being an occupational therapist and chaplain at St Mary’s School in Stratford.

Rob, who preaches every second month, enjoys much at Taranaki Cathedral, regarding the Tuesday morning Community Café as a weekly highlight. “It’s what the future will look like…if you want to see what Jesus looks like in NZ come to the café.”
The history of St Mary’s and initiatives such as Our Shared Story, which began last year, are exceptional because of the encounters they provide for people to explore a shared history. They tie into wider acknowledgement of Te Reo Māori, says Rob, noting that it was the first language spoken by the Anglican church in NZ, which began as a missionary church and morphed into a Pākeha institution.

As we look to the cathedral’s future, Rob sees interfaith conversations as a vital, “potent” and uniting force when it comes to issues like modern day slavery and climate change.

“I give credit to [former Archbishop] David Moxon who during his time in the Vatican in Rome initiated contact with leaders around the world on the issue of modern slavery.”

Rob, the young man inspired by good news stories over 40 years ago, retains his spiritual enthusiasm despite a journey through many church groupings.