Empowering girls and women in an African region is proving life changing, says an Anglican bishop with strong links to Taranaki Cathedral Church of St Mary. 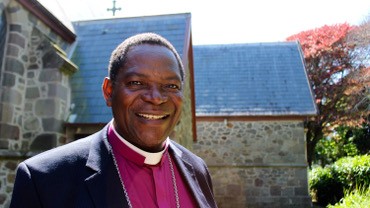 The Right Rev Given Gaula is the Bishop of Kondoa, situated in the north of Tanzania, a role he’s held for three years since completing theological study at St John’s College in Auckland.

St Mary’s supported him and his family while they lived in New Zealand and during October he visited friends and supporters around the country as well as speaking at a mission conference.

The district of Kondoa is similar in size to Wales with a population of 650,000.

Ninety per cent of its people are Muslims; the other 10% identify with other faiths. When Bishop Given began, there were 11,000 Anglicans, now there are 15,000.

Tanzania is a secular state and Christians and Muslims live in peace with each other. “When I go to do confirmations Muslims will come to my services….there is no religion affiliated with the Government and people are free to spread and talk about their religion.”
Nonetheless, women are regarded as second-class citizens in the country’s Muslim communities.

Girls leave school early, or don’t start attending, because they’re expected to work in the home and look after younger siblings while their mothers labour outside.

‘Women in Empowerment’ is one of the church’s core programmes with 103 having graduated since it started two years ago.

Each three months, 15 women come together, living onsite in Kondoa to learn basic literacy and numeracy as well as life skills.

“We want to impart life skills and knowledge by teaching them to sew, to cook, to garden and other skills so they can contribute income to their family.” Once they graduate, the intention is that the women can make cakes to sell, sew for others or grow food.

“We want the Anglican church to be a transformative force for their community in a holistic way.”
The women are from different backgrounds and faiths but they become friends during the time they live onsite together. “We see it as a way for peace and reconciliation for the community. When they come together they create a long-lasting friendship, regardless of where they live.”

Some became Christians despite the possible severe repercussions. “Some Dads have been good and have said ‘I’m happy’ but religious leaders might oppose it. Even though we are a secular state there has been marginalisation.

“Amongst Christians who have converted, they are expelled from the family. They have lost their land rights and without land there is no life.”

Bishop Given says the women begin to see that love characterises Christianity, whereas their experience of Islam tends to be one of rules and subjugation.

For the past two years a benefactor in the UK has funded the programme, now he is hoping to gather sponsorship from elsewhere. To date, 103 women have graduated with the programme costing $355 per woman.
“We have a vision of having a bigger programme to transform lives and provide better education but we have to sustain this first.”

As well as the ‘Women in Empowerment’ programme, the church is training clergy and laypeople with hopes to bring 140 to the Bible college in Kondoa over the next 10 years.

*Anyone interested in learning more about the Women in Empowerment programme or in sponsoring these young women can email gmgaula@gmail.com or contact Rev David Pearce at the cathedral.

The Rev David Pearce is part of the ministry team at St Mary’s. His faith was deepened by his time living and working in Tanzania. David has just released his autobiography called Kondoa 31 – One Man’s Journey Through Life, which details his time in the African nation. It’s a fascinating read. People wishing to buy a copy can contact David, with all funds being donated back to ministry and mission in Kondoa, Tanzania.