Neil and Raewyn Wolfe with the commemorative certificate of their wedding day at St Mary’s Church.

Being fashionably late to her wedding wasn’t an option for bride Raewyn Phillips – hers was just one of four held at St Mary’s Church on a busy Saturday in April 1966.

“Our service was at 11am and the Reverend stressed to us that I couldn’t be late because there was another wedding at 1pm,” says Raewyn, who married well-known Taranaki rugby player Neil Wolfe on a sunny New Plymouth autumn day.

“As it turned out, our wedding was quite long – we didn’t get out of the church until 12.15pm. The congregation for the next wedding were outside waiting, so as ours came out, they came in,” she laughs.

Unfortunately, the popular and beautiful church, which is now Taranaki Cathedral Church of St Mary, has been unable to hold weddings, funerals, or baptisms for more than two years. It was closed in January 2016 for earthquake strengthening, and a fundraising campaign is under way to raise the $15 million needed to strengthen the building and develop the site further.

Raewyn and Neil’s four children were married in the church and it has been the place of many family baptisms and funerals. Raewyn, who has been organising the flower arrangements for all events at St Mary’s since 1991, says it’s very sad others are unable to have their special family occasions in the cathedral.

“It’s the church that our parents were married in as well, so I have a real love for the church. Neil’s mother, Mary, was Welsh and we had some beautiful Welsh music played during our wedding by Len Kerr [St Mary’s organist and choir master for more than 30 years].

“A lot of Taranaki people have a deep connection with the Cathedral, so hopefully the money can be raised as soon as possible and it can be opened again quickly. It’s an important piece of Taranaki’s history, so we don’t want that to be lost,” she says.

To support the remediation efforts, Raewyn and Neil have made a donation to the project and taken up the opportunity to receive a commemorative marriage certificate. It includes a picture of the cathedral, their names and the date of their wedding. The offer is open to anyone who has been married in the church.

“It’s a wonderful idea, a great memento of our day, and a lovely way to help support the project,” she says.

If you were married at St Mary’s or know someone who was and would be interested in supporting The Cathedral Project, Campaign Manager Jan Mason can provide further information. You can call Jan on 021 020 33888, email jan@taranakicathedral.org.nz, or pop into the project office at the Cathedral. 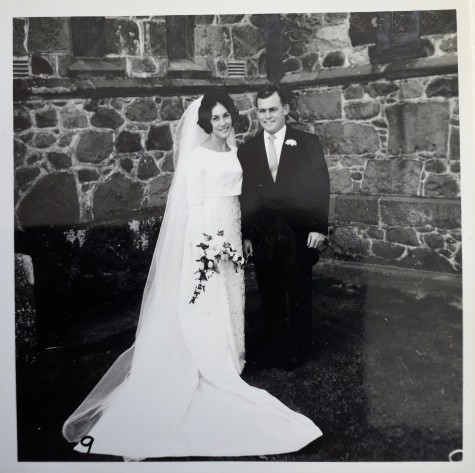 Neil and Raewyn Wolfe on their wedding day outside St Mary’s Church, 16 April 1966.