Although light rain falls, the aroha and warmth of Archdeacon Tiki Raumati shines through as people of all races and faiths gather to lay to rest the respected minister and kaumatua.

Being buried in the grounds of Taranaki Cathedral Church of St Mary is, in some ways, The Venerable Tikitūterangi (Tiki) Raumati’s final sermon – a silent yet visible, powerful and enduring message of peace and reconciliation, reaffirming his profound connection with Taranaki Cathedral and his commitment to bringing people together.

“He loved this place,” Archbishop Philip Richardson says of the 81-year-old, who died on 30 August. “He was ordained here and wanted to be buried here.

“He was the embodiment of the aspiration that we have as people in Aotearoa. That if we face our history honestly – the positive parts and the really difficult parts that have divided us – we can build a different kind of future together.

“By being buried here he saw it as a commitment that had been his life’s commitment – to try and bring reconciliation through an honest telling of history.

“He never resiled from this challenge and from pushing us hard, which he did in a spirit of encouragement and aroha. So lying here means that challenge is always going to be in front of us and we can’t ignore it because we can’t ignore him.”

Having served in ordained ministry since 1965, Archdeacon Raumati, a proud member of Ngāti Mutunga and Te Atiawa, was kaumatua for Taranaki Cathedral, patron to countless community initiatives, and kaitautoko to whānau and hapū throughout Taranaki and beyond.

“Every preacher has one good sermon, I reckon he had three,” Archbishop Richardson says.

As those gathered drift away, the light rain gives way to a glint of sunshine and a brilliant rainbow fills the sky.

* Archdeacon Raumati is only the second person to be buried in the grounds of Taranaki Cathedral since 1935. (The ashes of Archdeacons Gavin and Liggett were interred in the 1960s). Carrie Allen, the daughter of former cathedral dean Jamie Allen and wife Suzy, was buried in the grounds in 2012. The graveyard was closed in 1861 and new burials are allowed only under special circumstances. 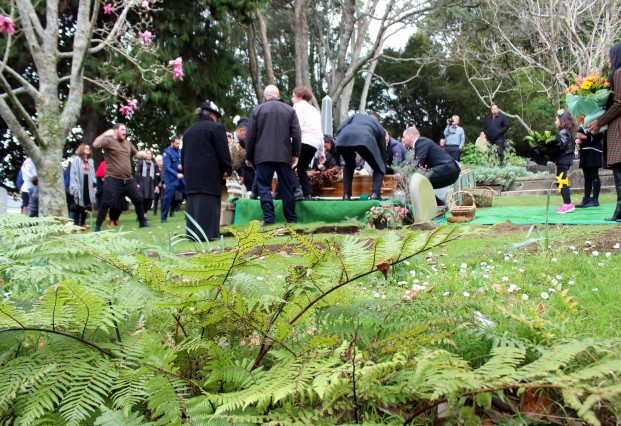