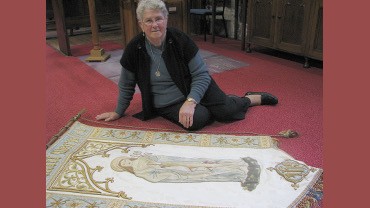 The banner was created by the women at the Royal School of Needlework in London in 1907-08.

It depicts the Virgin Mary in shades of blue, beautifully stitched in silk shading, on a cream damask background. She is surrounded by borders and ornamentation in laid and couched gold work and braid.

The banner measures 160cm tall by 80cm wide. The mounting allows for a brass fleur-de-lis to be placed on the top, and a shaft inserted to extend the height to almost two and a half metres.

Clement Govett, a New Plymouth lawyer, bought the banner in 1908, and presented it to the Parish of St Mary in memory of his father, Archdeacon Govett, who was second vicar and ministered to the whole of the Taranaki region for 50 years.

Margaret Alington wrote in her history of St Mary’s, Godly Stones and Timbers, that Clement had been influenced by the ritualism he experienced in churches in England.

He thought the rather puritanical services in Taranaki needed brightening up with some colour and decoration, so presented the banner and the processional cross to add richness at festival times.

However, St Mary’s parishioner Mary Vinnicombe wrote in the magazine Threads in 2003 that the banner was greeted by considerable consternation among the parishioners, who saw it as “Papist” and therefore an unsuitable image for an Anglican church.

But the years softened that opinion, and by the time Mary and her husband joined the choir in the early fifties, the banner was carried at the head of processions on “high days and holy days.”

Mary’s says by then the banner was beginning to show serious wear, so it was sent by sea to London, to be refurbished by the Royal School.

The embroidery was cut away from the old silk damask, remounted on new fabric, and new gold work and braid were applied, while the cords and tassels were renewed. The banner was away for over a year, and arrived back in 1955.

after a further 47 years further repairs were necessary: the silk damask was decaying, the Virgin’s silk shading was showing wear, and the couching threads on the gold work falling apart.

“Fortunately,” Mary says, “embroiderers in the parish had the good fortune to attend two of Jo Dixey’s classes in New Plymouth, and knew that Jo could give good advice, and might even accept the challenge of the needed restoration.

“In August 2002 Jo collected the banner and was able to hand it back, beautifully restored, in January 2003.

“This time, the embroidery was placed on a cotton damask, which should last well, and it was covered with a fine net to help prevent further damage to the silk shading.

“Curiously, this enhances the embroidery, since it had stretched slightly by being hung over the years, and it now has an attractive three-dimensional effect, as the net contains the gentle folds.” 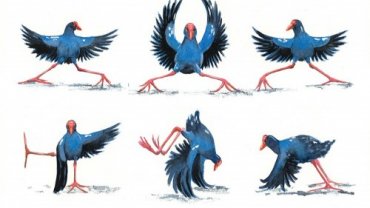 Here’s what’s coming up over in the lead-up to Christmas at Mere Tapu Festival of 9 Lessons & Carols –... read more

In-person services scheduled for Sunday Decemeber 5th (8am, 10am and 5pm ALT_Mary) are CANCELLED. In the past 24 hours positive COVID-19... read more

To find out more about the group you can emailStomp leader shemane.m@hotmail.co.nz! read more

Here’s what’s coming up over in the lead-up to Christmas at Mere Tapu Festival of 9 Lessons & Carols –...read more

In-person services scheduled for Sunday Decemeber 5th (8am, 10am and 5pm ALT_Mary) are CANCELLED. In the past 24 hours positive COVID-19...read more