Associate Anne calls it a day

Anne Knox’s appointment as Associate to the Dean in 2011 came “out of the blue.” Involved in the Baptist Church for many years in a variety of leadership roles, the Anglican approach from Dean Jamie and Archbishop Philip Richardson (then Bishop of Taranaki) was a surprise.

After all, this former police inspector was well ensconced in the Central Baptist Church, and busy with roles such as coordinating security at the 2011 Rugby World Cup and at Womad.

However, she mulled it over and decided the position was right at the time. She continued her involvement at Central Baptist church as an elder while juggling roles at the cathedral.

In the past four years she’s done it all, becoming acquainted with ‘Anglican’ speak, including the amusing parts. She jokes for example about being told that she lit the candles in church in the wrong order “so ever since then I would light the ones on the peace alter one way and other candles in the opposite direction so at least I got one lot right!”

The white gowns or albs worn by clergy and sacristans were ‘nighties’ and she was not immune to unintentional word plays: Let us ‘kneel or seat to pray’ once became ‘let us knit or steal to pray.’

Penning a sound – and short - sermon was something she constantly strove to do when she became licensed as a lay minister. Arriving at St Mary’s she was told: “Eight minutes for 8amers and 10-12 minutes for ten o’clockers.”

She worked alongside Dean Jamie in all pastoral and clergical matters and led the cathedral ministry team during his absence.

She headed up the Mothers’ Union, was on the board of the Tainui resthome and New Plymouth Foodbank. As a member of the stewardship committee she helped co-ordinate a host of events, even calling upon Baptist church contacts to cater for the service at which Bishop Philip Richardson was commissioned Archbishop.

In the past few years Anne held the additional role of cathedral development officer, which meant liaison and communication with different ‘stakeholders’: Engineers determining the earthquake prone nature of cathedral buildings, the district council, the Archbishop’s office, the Taranaki Anglican Trust Board (TATB), cathedral staff, parishioners and other interested individuals.

Her heart for people from all walks of life beat strong. Those wandering into the cathedral received time, a meal, a petrol voucher... or suggestions about how else to get help. In her job Anne was understated, constantly calm and respectful to everybody; the possessor of a dry wit, a deep and open faith, she kept things in perspective and will be missed by the cathedral community.

Anne, who left her cathedral position on February 29, plans to take up a new voluntary role with the Baptist church investigating the setting up a programme called ‘celebrate recovery.’ 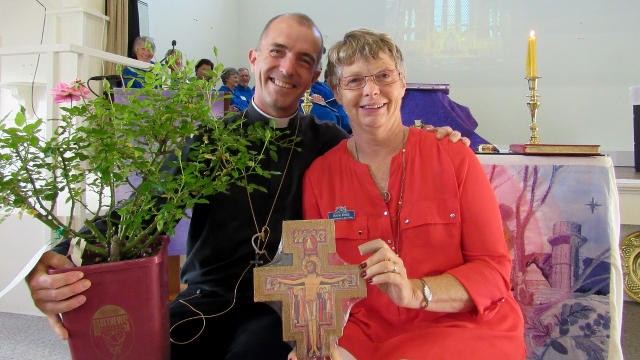