In March 1863 a group of Māori encamped on land they had reoccupied at Tataraimaka (as a protest over the Pekapeka block) were ousted with force by British troops in what they regarded as an act of war.  Māori friendly to the colonists warned that elements of Taranaki and Ngati Ruanui iwi planned to disrupt communications between Tataraimaka and New Plymouth via ambuscades, but these warnings were largely ignored. On May 4th 1863 a party of ten soldiers was ambushed while travelling along the beach between the Waimoku and Wairau streams near Oakura (more or less where the Oakura Surf Lifesaving club is located today). It was reported that the ambush party (numbering about 40) was hoping to kill Governor Sir George Grey, who frequently travelled along the coastal route. Instead, they encountered a prisoner escort detachment of the 57th Regiment, accompanied by two officers on horseback. There was only one survivor in the British party: Private Florence Kelly.

This memorial lists five of the nine who died. It is appears to be located at Lt. Tragett's grave, and it is unclear where the others are interred.

The Waitangi Tribunal has argued that apart from the attack on Sentry Hill in April 1864, there was an absence of Māori aggression throughout the entire Second War, and that therefore Māori were never actually at war. It concluded: "In so far as Māori fought at all – and few did – they were merely defending their kainga, crops and land against military advance and occupation." 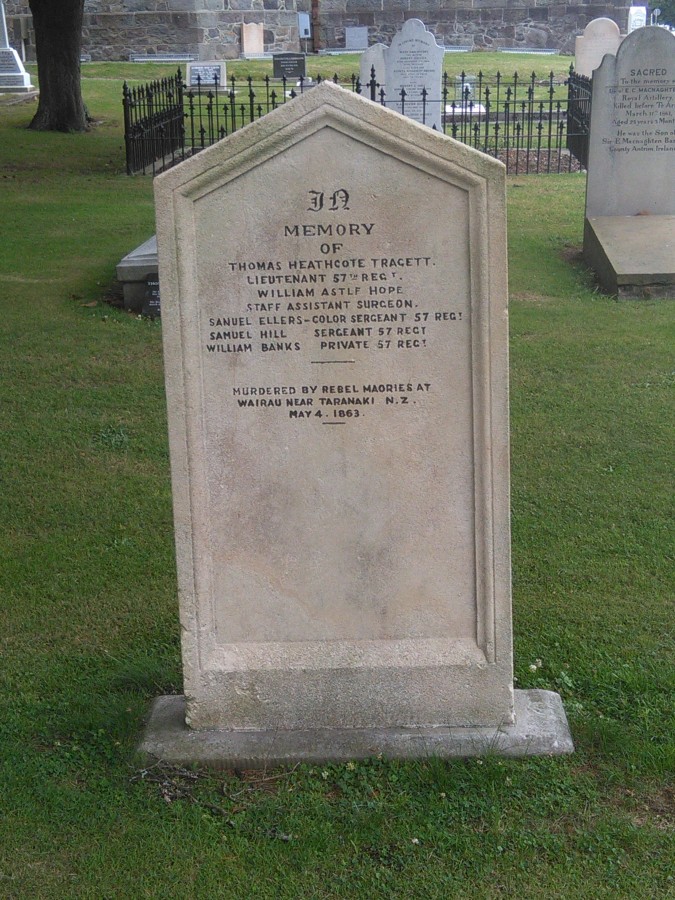